GQ magazine may not think Chris Brown can dress , we disagree by the way , but he can direct and star in his own music video. Chris Brown released pictures off the set of his new single Turn Up the Music which is set to be released to I-tunes on February 14 just in time for Valentines Day for Breezy fans.  Tell us what you think of the pictures  all courtesy of Chris Brown Zone. 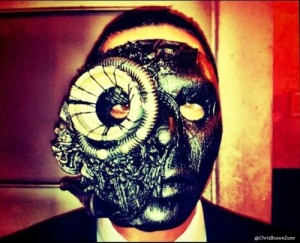 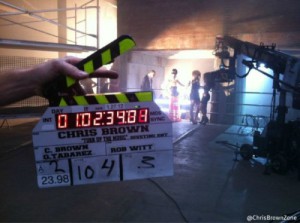 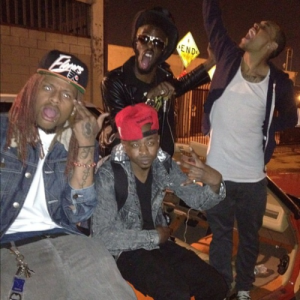 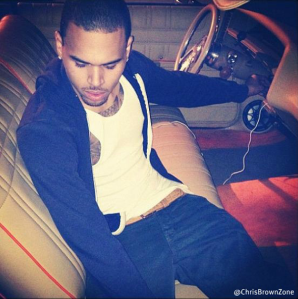 I have tried to stay away from this story but reading  US Weekly’s article  about the alleged “hooking up” of   Chris Brown and Rihanna made me toss my two cents into the depths of  cyberspace. For months various “sources” have alluded to the pair hooking back up and being in contact with each other. We all know the back story, young love shattered when two spoiled celebrities have a blow out in the back of a car after a pre-Grammy party. Their lives changed forever as Chris Brown was the pirah of the industry and Rihanna was championed for her bravery since the unfortunate occurence. It is clear that the couple broke up because the industry forced them to,  Rihanna received warnings from Oprah, Ellen and every domestic violence expert that found an outlet that would feature them. Chris Brown went on ill-advised interviews and twitter rants which did nothing for his image as he seemed surprised  and baffled by the pubic backlash and then there is  Rihanna turned well slutty. She has put out three albums since the assault seems to revel in using the public sympathy to negate her of any responsiblity. When the incident first happen she did her infamous ABC interview with Diane Sawyer where she cared about the message she sent to young girls. Now two albums and hair colors later she is no role model and not responsible for the images she puts out. She just has to live the “Rock Star” life style which means drinking, partying , smoking weed and planting pictures to in the press to back that image up. Chris seemed to move responsibly doing his community service, getting rave reviews from the judge during progress reports and in releasing his album  F.A.M.E in 2011 spawning the mega hit Look at me Now and duces. Chris Brown was back performing at the awards shows, getting mainstream interviews and dating model Karrueche Tran. Chris’s comeback was noticed by the industry when he received Grammy nominations for the album and praise from former love Rihanna. Rihanna’s tune on Chris changed more in the last year then her vocals during a live performance. When the pop tart covered Rolling Stone she explained her strange decision to remove the restraining order against Brown as professional decision. ” His career did nothing to me” she informed the public and told her fans “I never need to talk to Chris Brown again”. Of course before the interview hit  stands the Bajan had already followed Chris on twitter so she would be able to talk to him again in direct messages on the social network. When her fans called her out on the decision she snapped at the fan.  That was explained in her Glamour  interview as it’s just twitter not marriage. Fast forward to her Esquire interview where the Bajan praised Brown’s ability to turn his career around when his back was to the wall and cited how she love the music he was making and that leads to the pair twitter declarations of love for each other. Star, Life and Style , In Touch and the National Enquirer have run stories about Rihanna’s undying love for her ex and with the Us Weekly story we can only  say where there is smoke there is fire. Chris Brown’s rep says he and Rihanna are just friends and he has not strayed on Karrueche and Rihanna seems to enjoy the attention the story brings her as she plant photos in the press of her smoking weed, wearing G-Strings and being raunchy. Who knows where this obsession will land the two of them but Mediamyxx will be here to report it. What is your opinion on this story? Hit us at @mediamyxx or @akireshenri

Despite the many rumors about Chris Brown flirting with ex Rihanna he shows the world his feelings for girlfriend Karrueche Tran. Chris not only tattoos her name across his heart but tattooed her face on his body. It’s clear he didnt learn from Nas but hey young dumb love is the best kind. Hopefully things stay smoothing sailing for this couple as removing a tat is harder than getting it put on. See pictures of the tatoo here:http://www.vibe.com/posts/peep-chris-brown-gets-tattoo-his-girlfriend-karrueches-face

This work is licensed under a Creative Commons Attribution 3.0 Unported License.